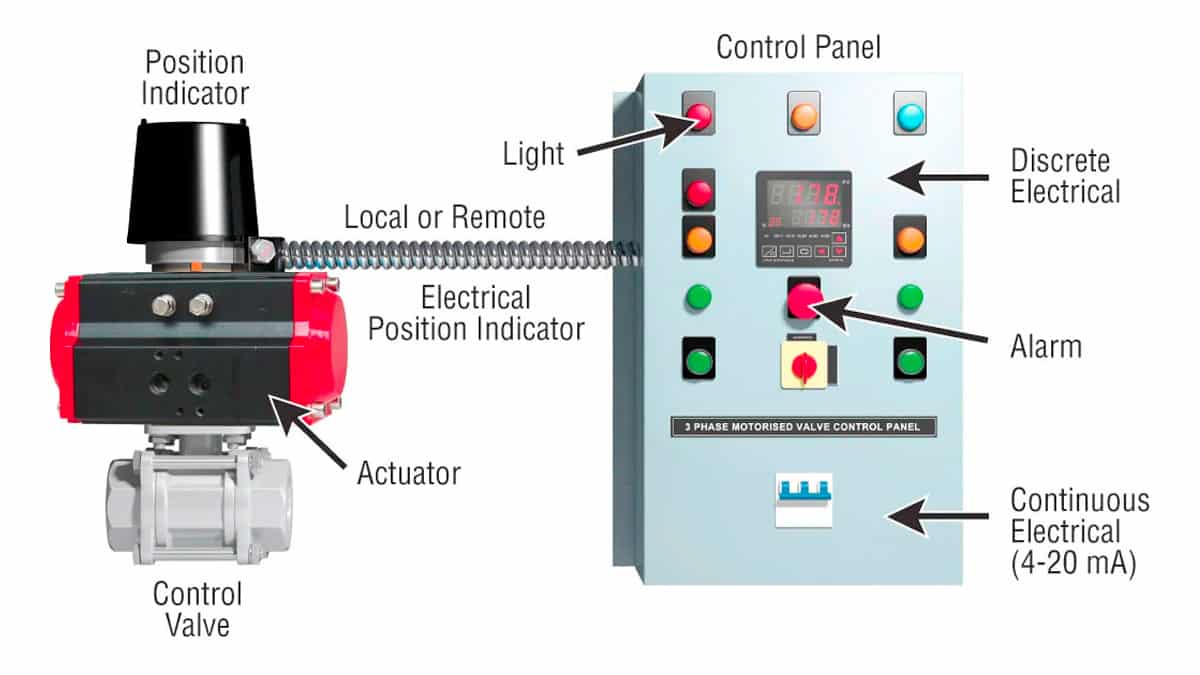 The major components of the industrial control system would be actuators, control valves, Sensors, etc. We can describe the control valve as the final control element of a control system. The major process variables in an industrial process are temperature, pressure, level, and flow. So the process variable should be kept in a specified range for the proper operation.

The control valve would open or change the direction of flow based on the signal which is received from the controllers.

What are the major parts of a control valve?

This Is a flexible element that is responsive to pressure and functions to transmit the diaphragm plate force and stem.

concentric plate with a diaphragm to transmit the force to the actuator stem.

This is a spring or a combination of several springs that are in the yoke that functions to move the actuator stem in the opposite direction to the diaphragm pressure.

This is the part that functions to regulate the compression of the spring, usually in the form of a thread on the actuator or yoke stem.

This is a rigid, immovable part that serves as a support and connection to the valve actuator unit.

How does a control valve work?

What are the major functions of a control valve?

What are the major requirements of a control valve?

How should we select a control valve?

What are all the tests that must be conducted in a control valve?

Installation of the control valve

Prior to installation, make sure that scales, welding chips, or some other unfamiliar materials have been cleared out of the cycle line to which the control valve is to be connected. While installing the control valve guarantee the interaction of liquid stream heading coordinates with the stream course demonstrated on the associating spines of the valve body. Install the control valve, in a position such a place that its actuator is situated vertically. Make sure that there are no edges of the gaskets associated with the line extruder into the cycle pipe. Ensure the chosen gasket material is appropriate for the interaction liquid.

Mostly the control valve is the final process control in a system. So if this device is not installed properly then it won’t be able to do the proper control of the process. While installing a control valve we should make sure that it has proper space for the safe operation and maintenance of the valve. Control valves should not be installed in a place where there is vibration and external stress because it can badly affect the operation of the control valve.

How should we inspect a control valve?

The control valve should be inspected periodically because it is the final control element in a system. So if it’s not operating properly then it could affect the whole process.

How SMEClabs can help you to start a career in instrumentation?

If you are planning to start a career in instrumentation, then you can choose SMEClabs. Most industries are looking for certified professionals so you must be certified to get placed. So if you complete the instrumentation course from SMEClabs then you would be internationally certified. You would also be trained by experienced professionals so you would acquire a lot of skills from them.

What is DevOps and how it would benefit an organization?

What is DevOps and how it would benefit an organization?